During one week in the summer of 2002, more than 34 inches of rain fell in the upper watershed of the Guadalupe River, setting off a torrent of floodwater that carved a perfectly fascinating geological wonder – the Canyon Lake Gorge – out of the earth.

The flood roared through the Hill Country northwest of New Braunfels, tearing away soil, ripping up huge trees, crumpling houses and sending a rush of water from swollen Canyon Lake over its spillway for the first time since the reservoir was completed in 1964.

It is a textbook example highlighting Hill Country geology and the exposed Trinity Aquifer, clearly showing faults, fractures and seeps in the limestone. Limestone layers created from an ancient sea are visible, and visitors admire waterfalls and springs where the aquifer is exposed. 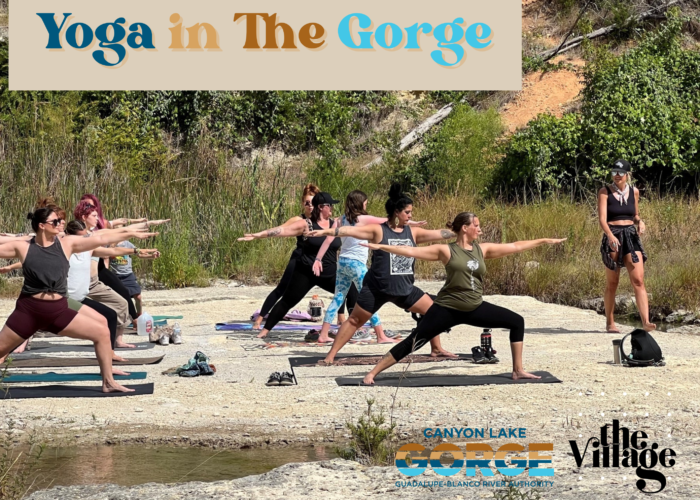 Yoga in The Gorge

Join us this Fall, September – November for Yoga in the Gorge featuring Kelly Beck and instructors from The Village Studio. Enjoy a 45 minute yoga class + self-guided hike along the Gorge Overlook Trail for $5 per participant. Participants are encouraged to arrive early to pay at the door, below are the dates and times for this event.

Those participating in the morning session will have the opportunity to hike after the Yoga session.

Those participating in the evening session will have the opportunity to hike prior to the Yoga session.

Participants must bring their own yoga mat. Water bottles are encouraged or you may purchase one at the visitors center. The Gorge is a real-life classroom in which visitors learn how the aquifer’s underground permeable rock cavities soak up, store, and move rainwater that many in Central Texas depend on for drinking water and irrigation.

Geologists and oil company representatives come to study the faults and fracturing of the Gorge’s limestone.

And the Gorge gives Tour Participants an opportunity to explore dinosaur tracks and perfectly preserved fossils, exposed for the first time in millions of years. Fossilized sea urchins are so perfectly preserved that one can see the spines and the minute seams along the creatures’ bodies. One can even see fossilized ocean ripples in the limestone. Since floodwaters first cut the Canyon Lake Gorge in 2002, GBRA has worked with the Canyon Lake community and specifically the Gorge Preservation Society, to ensure not only its protection, but also its development as a unique education and recreational destination.

The Gorge Preservation Society (GPS) is a community-based, 501(c)(3) nonprofit organization. Its mission is to promote the enjoyment and conservation of a unique natural phenomenon, the Canyon Lake Gorge. Over the years, GBRA and GPS have formed a unique and highly productive partnership that has made the Canyon Lake Gorge one of Central Texas’ foremost attractions.

The GPS is a driving force behind the Gorge and its many programs, and is composed entirely of volunteers. These dedicated volunteers work side by side with GBRA staff as tours guides and docents who lead gorge tours and assist with the GBRA Fifth Grade Outdoor Classroom. Additionally, the GPS volunteer Trailblazers work with GBRA to ensure the safety of visitors by helping to maintain the miles of trails and geologic features. Since the inception of the GPS in 2007, their volunteers have contributed close to 30,000 hours of volunteer service to the Gorge and its programs. The Canyon Lake Gorge would not be the experience it is today without the hard work and dedication of the Gorge Preservation Society and its dedicated volunteers. Click the link below to learn more about how you can get involved with the Canyon Lake Gorge and the Gorge Preservation Society.